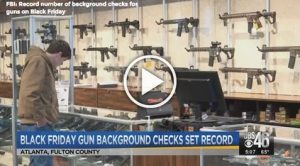 Forget electronics and appliances, guns were apparently the must-have item on Black Friday this year.

At Stoddard’s Range and Guns in Atlanta, Nikki Bradley is honing her shooting skills. She said she’s never been a “gun person” but started shooting a few months ago after a friend was carjacked during Atlanta’s slider crimes.

“After that happened, it made me want to shoot for self-defense,” she said. “I have two little kids.”

She isn’t alone in wanting to own a gun. The FBI received more than 203,000 background check requests for gun purchases on Black Friday, setting a record for a single day.

Stoddard’s sales were 18 percent higher this year than last year on Black Friday.

“Handguns seem to be the most popular items, but we sell a lot of rifles as well,” said Ken Baye.

Baye, who owns Stoddard’s, said there are several reasons guns flew off the shelves.

“We have a number of people who come in because they’re nervous about what they see going on around them, and they want to provide a greater level of protection for themselves or their family,” he said.