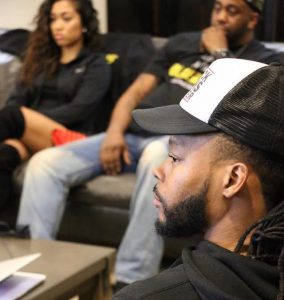 Maj Toure considers himself a Solutionary Hip Hop artist turned 2nd Amendment activist. He started the Black Guns Matter movement in 2015 and tours the country in an effort to educate urban communities on their 2nd amendment rights with a strong focus on the responsibilities of citizens to seek firearm training and to understand their rights. Stoddard’s has hosted a number of events with Maj and Black Guns Matter. Recently Maj hosted a round table at our Atlanta location with a number of members of the firearms community and of the African American community including Tone Trump, John Hickok, Rob Pincus, Shaneen Allen, Raspy Rawls Dj Mars, Edgar Antillion and Tisma Juett. I had an opportunity to sit down with Maj at this event where we discussed the 2nd Amendment and Maj’s role as educator and mediator. He has been featured in numerous media including The New York Times, Breitbart News, National Public Radio and NRA News for his approach to the 2nd Amendment. He enjoys bringing community players together and challenging them on the 2nd Amendment and how it relates to his community.

Previous post David Kramer and the Special Operations Care Fund (SOC-F) – “Not All Lives Are Saved on the Battlefield” Next post Kevin Nottage with Oakley Standard Issue – “I Want to Say Thank You – Your Glasses Helped Save My Life.”